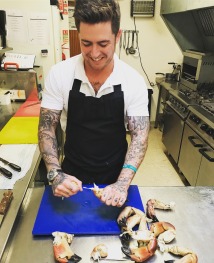 Recruitment campaigns and work have now started to open the new venue, in the old Lamb Hotel building on Ilfracombe’s High Street. A launch event is scheduled to take place on March 15th.

‘’We hope to be able to get partly open during February, then build up to a full launch with the event on March 15th’’ said Thomas, ‘’We’ve been blown away by all the support we’ve received. Not just in the money raised, but also the kind words and support’’. A target of £15,000 was set and reached, with funds raised now at £17,990. ‘’We don’t want to stop here, the reality of a new venture like this is it needs a fair amount to get everything up and running. We’re now all set to open, but to do things the way we’d really like to do them, we want to keep that total rising’’

In order to keep attracting more backers, the team behind the project have added more ‘rewards’ for ba

ckers to choose. Backer’s can choose to pledge anything from £10 – which will get your name printed on the restaurant’s planned ‘wall of fame’ right up to £8000 – if you’d like Thomas to cater an event or wedding for 50 guests. The campaign ends on January 27th 2018.

‘’Crowdfunding this way is a win/win scenario all round’’ continued Thomas, ‘’We’ll get well needed funds towards getting things off the ground, but the backers have all backed rewards they know are really good value, such as meals at the restaurants and even dinner parties in their own homes’’. Thomas will be visiting 5 different homes to cook meals for backers and their guests.

To back the project in exchange for a variety of rewards,
you can pledge by clicking the link below, or simply by Googling ‘Thomas Carr Kickstarter’

Thomas Carr prides himself on producing food of a consistently high standard, establishing a passionate, dynamic and creative dining/kitchen environment. Always experimenting with ingredients, flavours and techniques to push the boundaries of food and exceed the expectations of each customer.

Thomas has always been driven by a fundamental love of cooking and food, always seeking to learn and grow as a chef.

acombe, Devon – his hometown. From here Thomas moved to the Watersmeet Hotel, again in Woolacombe, where he was Chef De Partie for 5 years between 2004 and 2009.

In March 2009 Thomas went to work under renowned chef Nathan Outlaw at his Seafood and Grill Restaurant @ The St Enodoc Hotel in Cornwall. Originally taken on by Nathan Outlaw as a Sous chef, Thomas’ potential was quickly noticed and in February 2010 he was appointed as Head Chef at the brand new ‘Restaurant Nathan Outlaw’. Under Thomas the restaurant received two Michelin stars within a year of opening, along with numerous other accolades and awards within the hospitality industry. As well as the day to day running of the restaurant, Thomas also participated in outside events linked to the restaurant and Nathan Outlaw; including a ‘pop up’ restaurant in London and several food festivals/events.

In 2013 Thomas returned to North Devon to take up a role as executive chef at The Coach House, Kentisbury Grange, allowing him another opportunity to work with a renowned chef in Michael Caines MBE. Thomas built a full team from scratch and achieved 2 AA Rosettes within 6 months of opening as well as a full entry into the 2014 Trencherman’s Guide.

In the spring of 2014 Thomas was presented with an opportunity to fulfil a lifetime dream of owning his own restaurant in the harbour town of Ilfracombe, North Devon. The mixture of a bustlin

g, up and coming area and fresh line caught fish delivered to restaurant on an almost daily basis has made for a hugely successful start in business.

And it was at the end of September in 2016, that Thomas received a call so many chefs can only dream of. A call from the Editor of the Michelin Guide, asking him to attend the first ever live presentation of the guide on October 3rd.

Communications/ PR Expert. Helping small business owners to step into the limelight with the help of traditional & social media as well as virtual and real-life events. View more posts